Skip to content
Alex Blower
John Terry is alleged to have called Anton Ferdinand a “f***ing black c**t” as he retreated into the Blues half following a clash between the pair in the QPR penalty area during Ranger’s 1-0 win over Chelsea on October 23rd, 2011,
After the match Terry defended himself against the accusation explaining “I thought Anton was accusing me of using a racist slur against him.”
“I responded aggressively, saying I never used that term,” he said.
As this clip shows, the key part of the Sky tv footage, in which Terry explained “Oi Anton, I never said…” was obscured by Ashley Cole walking across the camera. 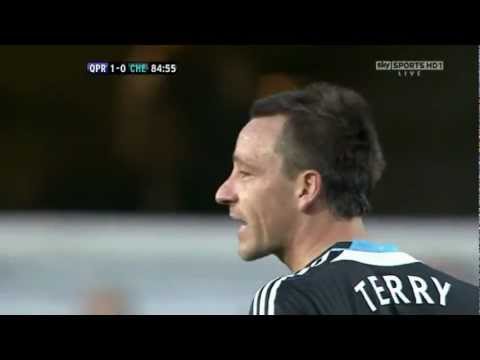 (Note: this clip is periodically removed by the FA so please let us know if it is not working)
Ultimately, only Terry himself knows what he said and the FA and, the Premier League have been rapidly removing all video footage from YouTube and other video hosting sites elsewhere on the web.
The incident has become the subject of an FA and potentially a police investigation, with Terry facing the possibility of being stripped of the England captaincy and of being charged with some kind of public disorder offence. Ferdinand has made it clear that he is distressed by the incident but is keeping his opinions to himself – until the investigation is complete, at least.
Chelsea and their manager Andre Villas-Boas have rallied around the player, but there are many within football who are certain of Terry’s guilt.
Here’s a BBC radio interview with Blackburn Rovers striker Jason Roberts in which he explains why he doubts Terry’s explanation of what happened.
James Murphy
The prospects of John Terry facing a criminal trial for the alleged racial insults became a lot stronger on December 1st, 2011, when the Metropolitan Police decided to pass on their file to the Crown Prosecution Service.
This meant that, having reviewed the incident and interviewed John Terry under caution the previous Friday,  November 25th, that the Police felt that there was sufficient evidence for a potential court case. It will now be down to the CPS to decide whether the England and Chelsea captain will face a trial.
Questions